Several Democratic presidential hopefuls are calling for Americans to make reparations for slavery. On June 19, the House judiciary subcommittee on the constitution, civil rights, and civil liberties held a hearing. Its stated purpose was “to examine, through open and constructive discourse, the legacy of the Trans-Atlantic Slave Trade, its continuing impact on the community and the path to restorative justice.”

Slavery was a gross violation of human rights. Justice demands that all participants in the Trans-Atlantic slave trade make compensatory reparation payments to slaves. However, there is no way that Europeans could have captured millions of Africans. That means compensation would have to be paid by Africans and Arabs who captured and sold slaves to Europeans in addition to the people who bought and used slaves. Since slaves and slave traders and owners are no longer with us, compensation is beyond our reach and it's a matter that will have to be settled in hell or heaven.

Let's pretend for a moment that the reparations issue makes a modicum of sense. There's the question of responsibility. More explicitly, should we compensate a black person of today by punishing a white person of today, by taking his money, for what a white person of yesteryear did to a black person of yesteryear? If we believe in individual accountability, we should find that doing so is unjust. In other words, are the tens millions of Europeans, Asian, and Latin Americans who immigrated to the United States in the late 19th and 20th centuries responsible for slavery, and should they be forced to cough up reparations? What about descendants of Northern whites who fought and died in the name of freeing slaves? Should they pay reparations to black Americans? What about non-slave-owning Southern whites -- who were a majority of Southern whites -- should their descendants be made to pay reparations?

Reparations advocates make the unchallenged pronouncement that the United States became rich on the backs of free black labor. That's utter nonsense. While some slave owners became rich, slavery doesn't have a good record of producing wealth. Slavery existed in the southern states and outlawed in most of the northern states. Buying into the reparations argument suggests that the antebellum South was rich and the slave-starved North was poor. The truth is just the opposite. In fact, the poorest states and regions of our country were places where slavery flourished: Mississippi, Alabama, and Georgia. And the richest states and regions were those where slavery was absent: Pennsylvania, New York, and Massachusetts.

The reparations movement would be an amusing sideshow were it not for its damaging distractions. It grossly misallocates resources that could be better spent elsewhere. According to the state Department of Education, 75% of black California boys cannot meet state reading standards. In 2016, in 13 of Baltimore's 39 high schools, not a single student scored proficient on the state's mathematics exam. In six other high schools, only 1% tested proficient in math. The same story of low education outcomes can be told about most cities with large black populations. I'd like to see lawyers bring class-action suits against public school systems in cities like Philadelphia, Baltimore, Washington, Detroit, and Los Angeles for conferring fraudulent high school diplomas. Such diplomas attest a 12th-grade level of academic achievement when in fact those youngsters often cannot perform at sixth- or seventh-grade levels. 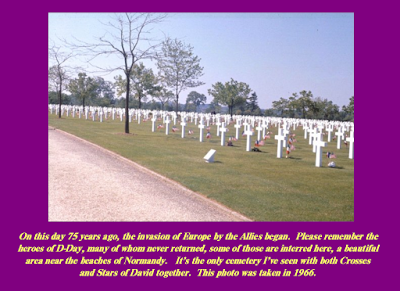 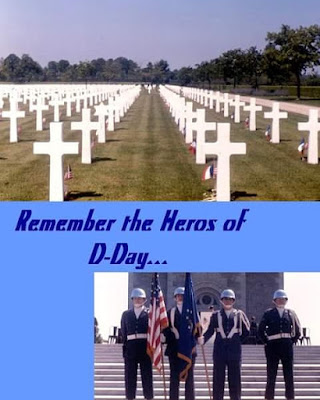 As a young Airman in 1966 I was honored to accompany the Color Guard for D Day commemoration services at the resting places for   some of the Americans that lost their lives that day.  It was a moving and life changing experience.
May they find comfort in the arms of Angels...
Posted by Roman at 3:24 AM No comments: